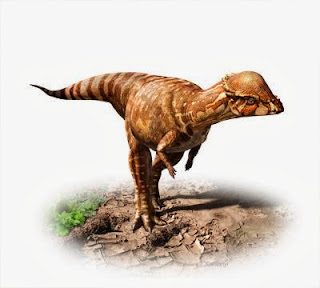 An artist’s rendition of Acrotholus audeti. Photo: Julius Csotonyi
What’s 90 pounds, six feet long and has an adorable little bone-cased bump for a head? No, not Cubone. It’s this newly discovered dinosaur, Acrotholus audeti, which was dug up recently in the Canadian province of Alberta.
Like the dinosaur havens of the mountainous west, from Montana and Idaho to Utah and Arizona, Alberta is practically stuffed with dinosaur fossils. But by digging around in the the Milk River Formation in southern Alberta—a region traditionally not known for loads of fossils—researchers found something new: the dome-headed skull of Acrotholus audeti. Dated to 85 million years ago, this is the oldest-known North American member (and maybe the oldest in the world) of the big family of bone-headed dinosaurs.

The little dinosaur was an herbivore and, other than the occasional headbutt, might have been pretty cool to hang around. But more than just being a neat little dinosaur, says Discover, the finding is a hint that little dinosaurs may have been way more common than we think.
Most dinosaur finds are of the bigger brethren: big bones are less likely to get picked over and crushed by scavengers or destroyed by time. But, with their big-boned heads strong enough to survive the trials of millions of years, dinosaurs like Acrotholus audeti are helping paleontologists flesh out the record of little dinosaurs. The new find, says the Canadian Press, “ touched off further investigation that suggested the world’s dinosaur population was more diverse than once believed.”